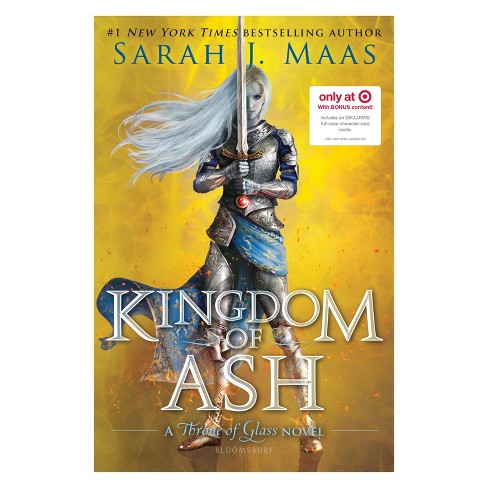 Let’s just go ahead and start this off by saying that this review will have spoilers, if not just for the book itself then mainly for the series, so if you haven’t read the series and are trying to judge whether to, this may not be the way to do it.  If that is the case I will say that you should read this series, and it is definitely worthy of the massive hype it’s received over the years.  On the subject of spoilers, if you haven’t read the series that might be hard to avoid in this review, but spoilers for the book itself will be further to the bottom, and marked with as blaring/bold a font as I can get, so I will do my upmost best to make sure that no one is ruined for this book, because no one should ever be hit with a spoiler they don’t want (I’m looking at you twitter!).

So, to start off let’s talk about the special edition I picked up; Target’s edition with trading card.  Well, they made it sound like this kick butt card with special artwork or something, and it’s nice, but special?  If I’d known that it’d have the same artwork as the cover and information that anyone who has general knowledge of the books could write I might’ve gone for the Barnes and Noble or Books-A-Million versions.  Still have no idea why I didn’t, because Charlie Bowater, I can’t get over her Sarah J Maas artwork, it is incredible people.  If you have the opportunity or ability to still get one of those editions I highly recommend it, Charlie Bowater even has said that she won’t be doing individual prints of that artwork, so this is the one chance!

When I picked up Throne of Glass a couple of years ago I was in college and just getting started on Goodreads.  During the series I met one of my fellow book nerd friends and discussed this series before class.  That was one of favorite fan moments, because we weren’t even waiting for a Literature course, but a business class, so finding a friend in there that loves books was amazing.  She moved, but I still love the book talks we still have.  That’s pretty much how this series and Sarah J Maas’s other books make me feel; they make it easy to make new friends and bond over our favorite fan moments or those scenes that had us freaking out.

Since the first book, Aelin has come a long way; she changed her name back from Celaena Sardothien, went through several relationships, and both accepted and overcame her dark past.  All of this happens in the span of seven books, and Maas did an excellent job building up not just Aelin, but Dorian and Chaol as well (Be sure to pick up Tower of Dawn if you haven’t, I’d say its hard to pick up this book otherwise).  In her stories every character is important and has a part to play in the saving of their world, a nice change in comparison to the typical style of one individual being the savior.

Most of the books do have a tendency to test your heart, since there are a lot of struggles for each of the characters, and Maas is no stranger to the occasional character killing, though she is no George R.R. Martin, and yet I’d say she still does come pretty close with recent books.  When I finished Empire of Storms I won’t lie that I was very worried about where the next and final book would take us, since everyone (and I do mean everyone) was saying there was no way we would make it through the final book without someone big dying, and the list of potential deaths was being extended every month we all waited.  Not my happiest wait for a book, but here we are, and I think I made it out alright.

There were two big things that had me getting excited about the opening of the package when this book arrived; the amazing gold cover was a definite perk since it is beyond gorgeous, but also the size.  This thing is ginormous, which I suppose shouldn’t be surprising, except for the fact that there were a lot of pages in Empire of Storms, but with the paper being thinner, that book manages to still be smaller than most of the books in the series so the size of this book makes up for that.  I don’t know why that ended up being a big deal for me, but it was since that was something that immediately came to mind looking at Kingdom of Ash.

Reading this book was the next big part of the excitement, the current read at the time (Recreated by Colleen Houck) getting tossed aside, even though I really was enjoying it.  From there it became a mix of ‘I’m so happy to be reading this’, and ‘oh god no, oh god no.  WHYYYY?????’.  I’m sorry to drop that figurative bomb like that, but here’s the honesty; this book is filled with some rough sections to read.  That doesn’t refer to the writing itself, but the events themselves.  Sarah J Maas didn’t pull her punches in this book, and I seriously was near tears for quite a few scenes, something that doesn’t happen very often for me.  Do I regret picking up this finale?  Heck no, this is one of the top finales to a series I’ve read in a while, I think it even bested ACOWAR in terms of suspense, and dread.  That book had me holding out hope no matter what, but Kingdom of Ash likes to kill your hope bit by bit.

Overall, I’d say this was a fantastic read, and a definite page turner.  Maas did an amazing job tying all the events of the series up, only a few details needing to be quickly touched on at the end, which considering how many things happen in this series is pretty awesome.  I still want more from these characters, but I’m glad to see them get their ending, and this book did an incredible job of bringing us to a conclusion.  I’m hoping the World of Throne of Glass really will show us some additional things about our characters as everyone is saying, but even if it doesn’t I’ll likely pick it up just to gush at how awesome this world is and has been.

YE BEWARE, You are passing the non-spoiler section and have reached SPOILERS

LAST CHANCE, SPOILERS – You can’t blame me at this point, sorry.  (Also beware the comments section, discussion happens there)

What did you think of the book?  Were you as torn apart by the events of this book as I was?  I don’t think I handled the first sections of this book very well, between Aelin being stuck in that coffin with Fenrys having to watch, and Aedion and Lysandra trying to pull off their fake Aelin I was freaking out during the beginning of this book.  Then we got Aelin out and every time we came back to Aedion I was about ready to skip to the next part so I wouldn’t be put through that much worry.  Very stressful.

Did any other Lord of the Rings nerds pick up on similarities????  There were a couple of moments where I was like ‘this sort of sounds like Lord of the Rings’.  The first was Dorian going to Morath (like Moria!!) with the keys and sneaking in (like Frodo and Sam), then the final battle with Aelin sounding the horn just gave me freaking Rohirrim vibes (see video here if you haven’t seen it) with I guess the spiders and Erawan/Maeve being the Harradrim charge later (video here).  Might be a bit of a stretch, but it just kept hitting me during this last battle segment.

-ENDING: Did you think the ending gave everyone a happy enough closing?  I still feel like I want more for Aelin and Rowan, but I’m thinking at this point I’m just glad they all made it out alive, though poor Manon. 😦  I kind of want to see everyone in Terrasan when it’s rebuilt since all we’ve ever seen of it is when it’s been stomped over by Adarlan in the beginning and then by Erawan and his dark forces later.  I want to see it with fresh life, happiness, and beauty, like when the hobbits return to the shire in the movies (we won’t go into that different book ending today).

The Scene where Aelin sees two Fae on a mountain top while going through all those worlds!!! Are we all agreed that that was Feyre and Rhys, because holy cow I can’t picture any other characters she’d throw in.  On the downside I was hoping the theories where somehow Feyre and Aelin were related might hold truth, oh well.

I feel like there’s details I’ve forgotten or missed over the years so next year might be a re-reading of the series, maybe even annotating in the books and post it noting for once.  I really want to relive this series and never let it end, so I might actually be re-reading a series for once even with how this series tore me apart.  Let me know all of your thoughts down below in the comments, and as always don’t forget to like and subscribe if you enjoyed this!

One thought on “Kingdom of Ash Review and Book Talk; the Finale to an Amazing Series”