I’m not always the fastest person when it comes to keeping up with new releases, so when this book came out I was one of those surprised readers who had no idea where this came from.  I figured Leigh Bardugo would not be done writing, but didn’t see the Grishaverse expanding then, so this book has been an incredible surprise, especially since I shipped Alina with Nikolai.  Not that that ended up being canon, but I still like Nikolai a lot more than Mal, don’t hurt me!  Someone asked recently how to read the Grishaverse books (which order), and while I answered with the best order I knew of, it made me also think just how much Nikolai has been a part of each of the series, so this book is a big moment for him and us, the reader!

Since I can say that I’ve read all the Grishaverse novels, it’s not hard to believe I love Bardugo’s books, and that this will be a pretty glowing review.  As much as I generally try to keep this as spoiler free as possible, it’s impossible to not spoil anything if you haven’t read the Shadow and Bone Trilogy or Six of Crows Duology, so if you haven’t read either this is a great time to pick up either or both since we are also about to get a Netflix series based on Shadow and Bone (yayyyyy!!!!).

King of Scars falls in the timeline after the Six of Crows duology, making the books follow order by publication year, which makes it really easy to follow if you buy whenever she puts a new book out.  Where for Six of Crows, you could get away with not having read Shadow and Bone, this duology feels like it’s necessary to have read the other series before getting into it, the characters being a mix from both, and while you can likely learn who they are as you go, it’s more meaningful coming from their earlier stories.

The characters focused on in this duology are Nikolai, Zoya, and Nina as far as POVs go, with Nikolai being the center focus, since he is the King.  Following the events from the Shadow and Bone Trilogy, Nikolai has hidden the dark things that the Darkling had done to him during the war, and now that he has returned from his time as a pirate he intends to bring his country back from the brink of destruction, except while he had survived the Darkling, some of the creature he had become has as well.

Following the war, Zoya, has become the General of the Ravkan army and the Grisha.  Nikolai looks to her more than anyone else, and trusts her with his darkest secret, and with keeping it under control.  When the creature begins to take more control, she will have to choose between her King, and her country.

Nina survived the biggest heist Kaz had ever thought up, but at a cost too high for her, and her one love; Matthias.  Nikolai gave her a chance to return to the Grisha, and find peace through action, but even months after being at the little palace, and going on missions she has yet to put Matthias’s voice in her head to rest, nor his body. 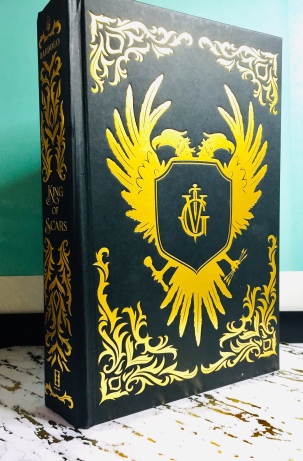 So, what was the outcome for me?

This book started off on a really strong note, throwing you into the action, and the darkness.  With how crazy my life can get, this was something that put this book pretty high on my favorites list for the year.  I can’t tell you guys how much I can’t do slow starts anymore, it’s just not pretty when you get home from work and stare at a book you know it’s just going to drag you along.  King of Scars instead throws you into the fray, and already shows you just how little control Nikolai has over the creature, even when he thinks he has it all figured out.  The stakes are already high, and there’s a note of the torture and darkness he faces ahead, it’s just so ooooh.  The fact that this novel manages to continue that same level of pace, or at least interesting drama points made it really easy to finish, and give a high rating.  This is the kind of novel that helps reading slumps.

One of the major strong points of this story, and the Grishaverse novels in general, are the characters.  Each one, even some of the smallest, are given this Bardugo deep treatment to their backstory, and how they play a part in both the small and large events of the main plot.  No one in this story is a Saint in reality, even if they are treated in name, and everyone has a darkness they have to cope with, or ignore in some cases.  Nikolai in particular, has always come across as that flirtatious, nonchalant character, his outward personality just making it hard for others to gauge where he really stands on something. He jokes to make light of the situation, and this book did a great job pointing that out as he runs his kingdom, but is faced with almost impossible decisions.  I think the only character that seems to catch onto his real feelings and worries is Zoya, who hides her own fears behind a tough exterior.  Oh, these poor two.  Mix in Nina, and her struggles with mourning and the after effects of using the parem, and this duology just makes you feel like that sequel needs to come fast.

The world of the Grishaverse grows with each of the series and books (map pictured below), each of the characters pulling different parts of the world, and the individual country’s personality out, giving more and more depth as we get to explore the different regions.  Even as we get into the darker parts of the story, it feels like there is so much more world to explore, and you find yourself taking in the setting even as you are dreading what comes next.

Following the trend of books for me this year, this book filled a need I didn’t know I needed, and continued my new struggle of needing a finale.  I honestly feel like most of what I’m hitting are first book in series, instead of getting last books, so it might get interesting as we get towards the end of the year if this trend continues.

Favorite Quote from the Novel:

“There was a time when words had been the only place he could find solace.  No book ever lost patience with him or told him to sit still.  When his tutors had thrown up their hands in frustration, it was the library that had taught Nikolai military history, strategy, chemistry, astronomy.”

Let me know your thoughts on the book, review, or both in the comments below!

2 thoughts on “King of Scars by Leigh Bardugo Review”