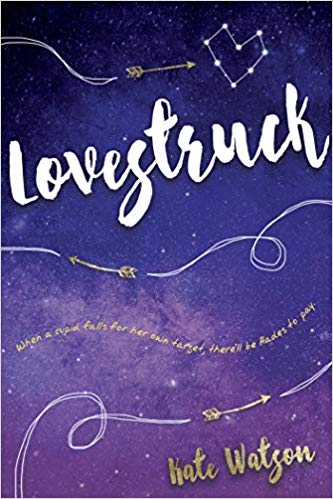 Once again, I want to really thank this author for sending me the copy of this book (I also reviewed her Seeking Mansfield novel!).  Thank you so much, Kate Watson!  It is amazing getting to review her work, and I am excited to get this review going!  Lovestruck marks the last of my June reads, putting us at a whopping 4 books, not bad for a month before my colossal July reading, and oddly enough this continues a trend from Red Rising, as we go into another Greek Mythology inspired book (I can’t tell you how happy that makes me!!) Cue the ‘I can go the Distance’ music, and let’s get into what was an amazingly fun feminine Hero’s Journey! 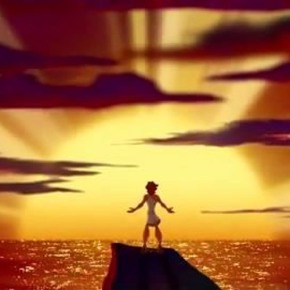 So, what is Lovestruck really about?  Lovestruck is a tale following the daughter of the one, the only, Cupid.  Not the cherub, Valentines day one (That makes this one very upset), but the Greek Mythology Eros, son of Aphrodite.  Kalixta, or Kali, is one of many matchmakers in training, essentially cupid’s students, whose main task is to observe and match mortals so that they find their one true love when they otherwise would be too scared to.  Kali, though is a unique case, as after an incident titled the Thundeclap, she no longer believes or wants to believe in the three fates being able to control anyone’s life, let alone forcing two unsuspecting people to love one another.  Not a great situation for a young goddess whose sole task involves that matchmaking.  Everything comes crashing together though, when the worst possible accident happens; she sticks herself with one of cupid’s arrows.  From there, she has to figure out the onslaught of feelings for this new mortal, while trying to overcome the fate and struggles she’s already been at odds with.

After reading Pierce Brown (his books are incredibly fast paced)this had a little bit of a slow start for me, which really isn’t a reflection on this book, but geez did it pick up once Kali set her mind to fixing the sticking herself problem.  Once we got to that point, the tension rose, and somehow we also got some really great character interactions that had me laughing  with them.  I also quickly began to ship Hector and Kali, though not saying what came of that, since spoilers (I will not be that person!).  I think going into the reasoning behind the 4.5 stars, I would say it was just the slower start that got me, which quickly changed, and honestly didn’t really affect me for too long.  The book picks up rather quickly after that, and is by no means, a Tale of Two Cities affair, which was a crazy 150 pages of agonizingly slow paced setup.

When saying that a book is inspired by or uses Greek Mythology in its story, there comes a moment where we all go, ‘how well?’  It’s the big question that comes up in these cases, and I can’t say it doesn’t make me pause with some books. A lot of times they surprise us, but it’s like going to see a movie based on a book, there’s typically something altered or left out, it’s just how it works.  I think to this day, Rick Riordan, is one of the main reasons I got into Mythology in general, and it’s because of how well he took fact and wove it into a world where Percy was interacting with it, and still making you laugh, even though Greek Gods can be pretty terrifying.

Watson, in this book did a great job of bringing us into the world of the Greek Gods, and giving us a glimpse at some of the big gods that I felt don’t always come up as much, since the big three are typically fair game, and used the most.  In her work, we get to know Eros, Aphrodite, Artemis, and Apollo, with glimpses at some of the others, and I honestly felt like her versions of them fit what I’ve read in Mythology so well.  Good lord, the Aphrodite jokes, those had me cracking up.  She also did a great job twisting the horrifying parts of these gods into funny sayings or moments, while still having the minor gods fearing them.  Much of Greek Mythology is set in stone, but Watson built off of it, and showed that while these beings have lived for centuries, they like humans, can fall into patterns, but maybe even learn from mistakes?

The Question of Fate and Love

So with Greek Mythology, there’s always a thing with Fate, or better yet, the Fates.  Yes, we are talking the three women sharing the eye in Disney’s Hercules, which to be fair, is what I was picturing during this book (Voices and all) and also in Riordan’s novels (anyone else on this??).  Their scenes in the film were probably my least viewed, and yet they always come to mind when I read about them in books, it is honestly very strange.  Here’s an image for reference if you happened to forget them, or think I’m just crazy (which I may be). 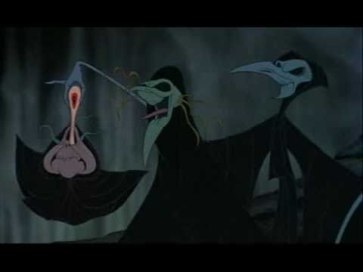 Aside from the strange images going in my head, there was definitely an emphasis in this novel on the idea of Fate itself.  In the beginning our understanding through Kali is that it is this road set before us with zero deviations or choices for us, at least in terms of us being able to change anything.  It is the big thing that comes with the issue of the ‘thunderclap’ which Kali alludes to, but doesn’t explain until later in the book.  She is constantly upset with the three fates because of this assumption, blaming them for the end of her love for her job.  For Kali, all her problems begin with this absence of choice, from her job to even her best friend, who loves her because of a similar arrow incident that happened to him as a child.  To be fair, a lot of her assumptions are never contradicted fully by her parents or those in power, which maybe could have helped her at some point.  Watson, though makes a really good point on both Fate and Love that have serious truth in the ‘real world’. Regardless of where you personally stand on the idea of Fate, there is definitely a path that each of us is on, its curves and direction dictated by choices we make.  The love part, is a little harder to go into without getting deep into spoilers, but it does follow an idea that you can’t create something out of nothing, most of the matches starting from existing relationships/interactions and building off of them.

The other part with love, or rather the beginning stages to a relationship, especially at a young age, is how wrapped up in it you can become.  Watson, did a great job showing this, as even if it wasn’t intentional for Kali, everything for her began to revolve around this love she had with the mortal.  Whether or not she was actively trying to get an out from this love, it was all consuming, pulling her friends in, and then abandoning them as she got sucked into the relationship.

I always love a good mythology story, and can never get enough hero’s journey stories.  They are one of my favorites, and Watson certainly didn’t disappoint with this one.  I think the lovesick part might have made me pause, but I stayed with it, and quickly applauded her for it since it showed potential areas for character growth.  This book also went fairly quickly, so my reading challenge is definitely thanking this read right now!  Have you read this book?  What were your thoughts?  Let me know in the comments below, and tell me about some of your Mythology favorites!

*** I do not own the Hercules photos, those are property of Disney****

One thought on “Lovestruck by Kate Watson {Book Review}”