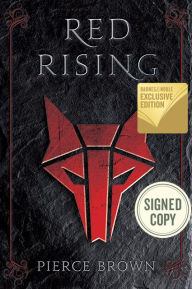 I’m going to make a statement that the reading world will probably go crazy over; I don’t fully reread books usually.  If I go back to a book I go through it like a highlight reel, enjoying my favorite moments.  I honestly would be better off just fully reading the book a second time, but that’s not how it works out for me.  That is where Red Rising surprised me, I wanted and knew I needed to reread it, especially since there is so much character growth for not just Darrow, but Mustang and Sevro as we go through each book.  The secret with this reread; it was waaaay better than the first time reading it.

At this point, I’ve rerated the book on Goodreads, so I’m not 100% sure what it originally was when I read it back in 2015, but given my mixed feelings in the beginning and addiction by the end, my guess would be 4 stars.  This time?

Overall Rating: 5 out of 5 Stars

I feel like the need to defend your reasoning gets a bit more intense when it comes to 5 star ratings, since it is the highest you can go, and you sound maybe a little obsessed?  Truth be told, I am obsessed with this series, and have been since I finished this first installment in 2015.  But why give it 5 stars?  Well, let’s break that down.

What is Red Rising?

Red Rising is Pierce Brown’s science fiction dystopian, where humankind is split into different classes; reds, greens, pinks, silvers, golds, etc (there’s definitely more).  The main bit to take away is that our Main Character is a low red, the lowest caste possible when the story begins.  When we are introduced to Darrow, he is content and driven by his status as a Helldiver, the best miner in his group as they work to make Mars livable for the rest of the population waiting back on earth.  Slowly though, he begins to find out that everything he’s been told has been a lie.  Instead of his work making way for those waiting, it is instead being used to make the Golds richer, the Golds who, like all the other castes, have already been living on the surface of Mars for centuries.  When everything in his life has been upturned, he finds himself being remade to become a Gold, and destroy their corruption from within, creating some of the best lines, like, “He is wrong.  None of them will survive.”

Red Rising, book one and series, are focused on the meteoric rise of Darrow, from his beginning as a Red Helldiver of Lykos, and then as he is reborn a Gold and fights to become one of their peerless scarred, the Gold’s terrifying elite class.  Recently, I’ve been watching videos that go into the best ways to introduce a science fiction / fantasy world to readers, and it definitely outlined some of the strengths of my favorite books, while helping to understand where others have gone wrong.  Pierce Brown chose not only a great character to launch our introduction to the world, but also in how we approach the world.  If he had started from the top there would be infinitely more to go into, making it difficult, if not impossible to avoid an info dump.  Instead, Darrow is not only at the bottom of the caste system, but his group has been lied to, and the full facts withheld.  His story begins with a choice, not made by him, but as he learns the truth with us, we start to see him making these plot driving decisions, and get to experience the moments when his world broadens.  The humble beginnings for him also give him a moral compass to act by, it doesn’t necessarily mean that he follows it, but it is incredibly important as he navigates the world of the Golds, where pretty much anything goes.

I’ve mentioned now that Brown has managed to avoid info dumps in this book, which is a feat in itself when tackling Science Fiction.  In addition, he has built a full functioning society(or pretty messed up one, depending on the caste), where each group interacts but mostly within the castes or in serving the Golds. Each of the groups have their own specialties, descriptions, and flaws.  For one, the Golds are considered to be like Gods, most castes not questioning their authority, though the Obsidians treat them more like Gods than any ofter castes.  The Reds seem to be the one group left in the dark, and also split into two varieties based on being above ground or in the mines.  The mines also seem to be more present in Mars, but beyond that the groups follow the same rules on all the planets introduced in the series, no matter how far out in the galaxy they are.

Going past the basic world description and the effectiveness of the caste system, the Golds have made themselves into the gods of Greek/Roman Mythology.  Most of the Golds have Roman sounding names, making Darrow a little questionable when he introduces himself.  To top it off the different houses in the training Institute are names from Roman Mythology; Apollo, Mars, Juno, and Diana for example.  It definitely made this first novel feel like an adult version of Percy Jackson, just minus the fancy powers.

There is one main reason Brown has become almost a cult following, and not just another sci-fi on the shelves; its Pace.  Say what you will about the language and crude references that can come up, but there are few books that take off at a run, keep you following it, and continue this mad pace through the books after it.  It’s one of the reasons I go and pick up his novels when they release.  I just know it’s going to get me hooked, and get me excited to continue through my reading challenge.

I would whole heartedly recommend this book (which I’ve been doing if you ask my friends), as I’ve had since I first read it.  If you want some rough, tough action that keeps you reading until you’ve finished without a clue of time, then this one is one of the few that I’ve had that experience with.  What were your thoughts on this book/series?  Let me know in the comments below!!