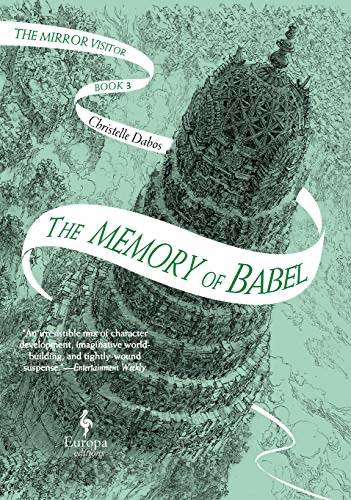 About this time last year I took a leap, bought two books, and found myself addicted to a series known as the Mirror Visitor Quartet. From that point on I knew I was going to buy every book in this series and likely inhale them. Now here we are, having read book three, and I’ve got a review to share! There are spoilers ahead, so if you’re interested in the first books, click here!

The Memory of Babel is the third book in the Mirror Visitor Quartet by Christelle Dabos. Following the events of the second book, Ophelia is back on Anima after saving Thorn and watching him disappear through a mirror. Stuck on her home Arc she is left to find out how to help him, stay under the radar of the powerful, and figure out the true creation of the Arcs.

Overall Rating: 4 out of 5 Stars

This was a great return to the world of of the Mirror Visitor Quartet and really well done. It starts out with Ophelia biding her time and trying to hide her knowledge from those in power, but it never came across as slow. Instead, I felt her inner struggle as she dealt emotionally with all that has happened, and all she’s lost. We even find out she’s been like this for two years, which makes the disappearance of Thorn and her “hiding” a lot more to contend with. In all honesty, it’s a surprise she isn’t broken under all of that.

Interestingly enough the thing that this series has done a great job with is the concept of a slow reveal. Each of the books has a big nemesis for Ophelia to overcome, but in the end it’s all to bring her closer to the revelation of the creation of the Arcs, and the figure often referred to as god. The World in turn, slowly expands as well, this book presenting a new Arc called Babel, where Ophelia hopes to find new information as well as Thorn. Why is this a big deal? Each Arc is wholly unique, from the buildings, landscape, and population to the governance that is there. There aren’t any convenient similarities (writing wise), and it all shows as Ophelia finds herself as the intruder or stranger in a stranger world. Considering how I’ve read fantasies and Science Fiction series that focus on one big world, this concept of many connected, but different worlds is something I just appreciate overall since it isn’t an easy feat.

One of the last great things we get in this book is the introduction of a new character POV as a way to learn what is happening back on Pole. I won’t say who since that would spoil things potentially, but it definitely added to the tension and incoming conflict. I think the last book was probably where the tension really felt like it was beginning to build, but this book definitely had me on edge a lot. It also gave us a lot of character growth from established characters as we approach the finale, which has me really excited for what’s to come!

So, why 4 stars then and not 5? For one, there is a valid criticism that has come up with word choice. I think in this case it is likely a translation issue more than the author’s intention, but it made me pause with the use of words like ‘retarded’ and ‘oriental’, which definitely should not be in use as descriptions. I won’t excuse the word choice, but I will say that it felt extreme where it was placed, making me really feel like it wasn’t what was intended, especially given that I hadn’t seen this in books 1-2. If I hadn’t questioned the extremity and already been well into the book I might have stopped reading there, and honestly missed out on another great addition to the series. I really just hope that this gets fixed by the publishing team, and does not happen in the final book.

Overall, I would definitely recommend picking up the third installment in the Mirror Visitor Quartet. These books have given a truly unique take on YA Fantasy, and I’m so excited for the last book that the year long wait just might kill me. Have you read The Memory of Babel? What were your thoughts? Let me know in the comments below!