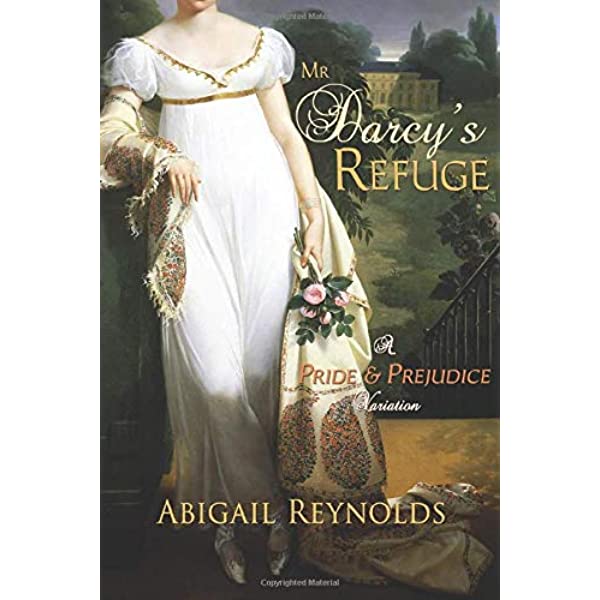 When fan fiction is brought up around authors it’s either completely rejected, accepted, or in some cases how some authors actually start out. We’ve all heard about Twilight, or the Mortal Instruments and their fan fiction roots, but what about fully fan fiction stories published on the market? Mr. Darcy’s Refuge is one among a collection of Pride and Prejudice centered novels (all separate from what I understand), capturing different potential scenarios the author imagines could have happened in the story.

In this Pride and Prejudice retelling, Darcy and Elizabeth are not given a nice, slow time apart to figure out their feelings for one another. Instead, during her time at Mr. and Mrs. Collins’ home a flood wipes out not only the nearby roads, and town leaving a crowd of villagers staying there too, but Darcy’s visit to Elizabeth alone coincides with it all. Trapped with limited stores of food, a possibility of her reputation at risk, and Darcy there after proposing, Elizabeth must figure out the best path forward for herself.

Overall Rating: 3 out of 5 Stars

I feel like I could never get enough Pride and Prejudice honestly. I always wonder what would happen after everyone is married, and how some of those complicated family relationships would really work themselves out. Would Wickham and Darcy really be ok with being related to one another, or would Wickham bring trouble after Darcy’s marriage to Elizabeth? One really would like to know that kind of stuff. That want to find out more though can either go really well or so poorly depending on what you pick up. From the start, this one at least sounded like it would stick to a lot of the same information that we had in the books, so we were safe from the major deviations that can and do often happen in these spin-offs.

I kind of want to get the bad over with since this was a pretty great read. This one is like a half and half; half negative, and have a positive for this book in particular; the characters. We do have a majority of the characters well represented in this story, it didn’t feel like any character or their actions were too distorted from what we would know from the source material, which is great. I know I certainly don’t like reading fan fiction where characters sound or do things differently than what you are familiar with. So what’s negative in this? Well, with these spin-offs it feels like one character is always changed in ways that hurt me. This book’s victim? Mr. Bingley. The man in the source material wasn’t exactly the strongest willed person in his circle, and took everyone’s advice a little too eagerly, but his changes hurt me since he and Jane were so sweet after the chaos that was Darcy and Elizabeth’s relationship in the source book. The man in this version doesn’t know Jane is in town just as before, but when he finds out Darcy not only talked him out of Jane, but proposes to her sister he blames Darcy with a scary grudge. It just made me sad knowing his happy ending was gone.

Beyond big character changes, this story introduces a new presentation of Darcy and Elizabeth’s relationship, and how it could really begin. It’s a little exaggerated when it comes to some of the ideas of propriety and how to maintain a woman’s good standing, but wasn’t far fetched. Since this changes some of the other characters a bit, there is also some really great character growth, and some changes that helped connect the reader to trot stories more.

This was a pretty short read when compared to the fantasy novels I’ve picked up this year but it was an easy and quick read if you are hooked on Pride and Prejudice.